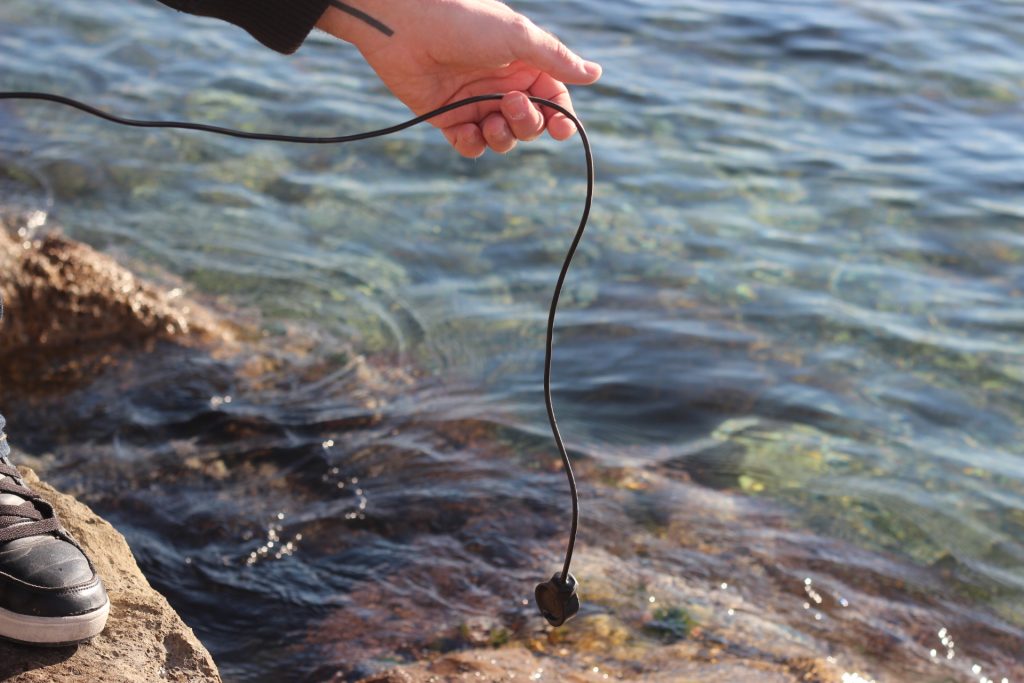 traces addresses reminiscences from the past and how they pervade in the present and the future through a site-specific sound art installation and a live performance based on a short one- week residence work.

traces figures a work in three different steps, each one representing the past, the present and the future, directly relating to hauntology concept.
In the first step, and after having studied historical bibliography of a specific location, the artist starts to record vibrations, from audible ones to inaudible ones, like ultrasonic and infrasonic ones, and especially radio-waves in different frequency bands. Using very specific tools, he seeks to capture invisible and more or less tangible fields of vibrations, as if he wanted to sense the emotional load of the space, accumulated during long years. In that step, the artist also edits, cuts and combines recorded material for the next step.

In the second step, Julien Bayle illustrates the now, the present, by performing a sound performance that only uses edited material. It addresses the idea of reminiscences and how they are injected in real-time in the very moment, the now.
In the third and last step, a sound installation is exhibited in the space

A specific attention will be paid for radio-waves field. Bayle’s father was a radio operator and the artist dived into this field from his youngest years. For him, « this medium relates the past injected in the present »

traces plays with the concept of hauntology by capturing traces from the past in the present and creating a new entity. This latter, figuring the art piece itself, is a new emanation and not only a the sum of the present & the past. This is a new work, another ode to dadaist cutup for which Brion Gysin and William S. Burroughs defined the idea of decontextualization and creating be using previously achieved works and elements. This is also refering to retrofuturism in the sense that the artist uses some very new technology to extract & sense the past as if, as wrote Mark Fisher, technology was a cultural impasse, a « failure of the future ». Machines are used in a way for only sensing, searching, digging the past to see how it has changed the moment, the present and the future.

traces also refers to the idea of Barthes’ about photography which is « an ectoplasm of what it was : not image, neither real, a new being: a real that we cannot touch ». This paradoxical assertion is one of the key of the project. It merges tangible vibrations into something new, something very real and related to physical world, to a place, to its story, but that we cannot entirely see or even apprehend.

traces is the first artist’ work that doesn’t figure any pictures, any image. Digging further his sound research as a way to express « more feelings than visuals », Julien Bayle gets to a new step and really takes sides by addressing concepts like subtle listening, patience and time instead of brutal disruptions.

At last, traces is a possible series. All along the work and travel for each session of it, the artist will collect, document and produce a new live performance & a new sound installation reflecting how its vibrations sensors & he perceive the space in which he stopped for a week. traces will then be physically and progressively released as CD sound recording releases, digital download releases or other types of format.

We are currently seeking for artist-residency for doing many episodes of this project. Please contact Aurélie Vial for more informations.

TRACES IS A RESIDENCE-BASED WORK

The artist applies to have a residence in a place for which he previously chosen from a critical and historical point of view. Such places like Alamogordo, New Mexico (for its link with nuclear test), Chernobyl’s exclusion zone, 3Bis F (art center, former set of cells for altered mental health women, Aix en Provence, France), Centralia Pennsylvania USA (with his permanent mine burning fire since 50 years) are aimed at.

As he gets in, he records the space. It can consists in recording sound, inaudible vibrations, light intensity, radioactivity counting. Each recordings is projected, rendered as sounds (data sonification). During each day, an important step is reserved to recording edition, writings and live performance preparation.

TRACES IS A LIVE PERFORMANCE & A SOUND INSTALLATION

traces live performance refers to post musique concrète, modular synthesizers and machine based setup. Tape recorders/players will be used for both sound processing but also for figuring the physicality of sound alteration. At each time the tape machine is playing, the tape itself is altered, the past becomes less present and the time influence seems to appear more clearly.

traces installation is a stereo or quadriphonic sound installation. A program previously designed play samples of recorded sounds following specific (and evolutive) rules, spreading each time a new textured sound field. This installation extends the project in the future and leaves a trace of the work after the artist will have left. Interactivity is an option.