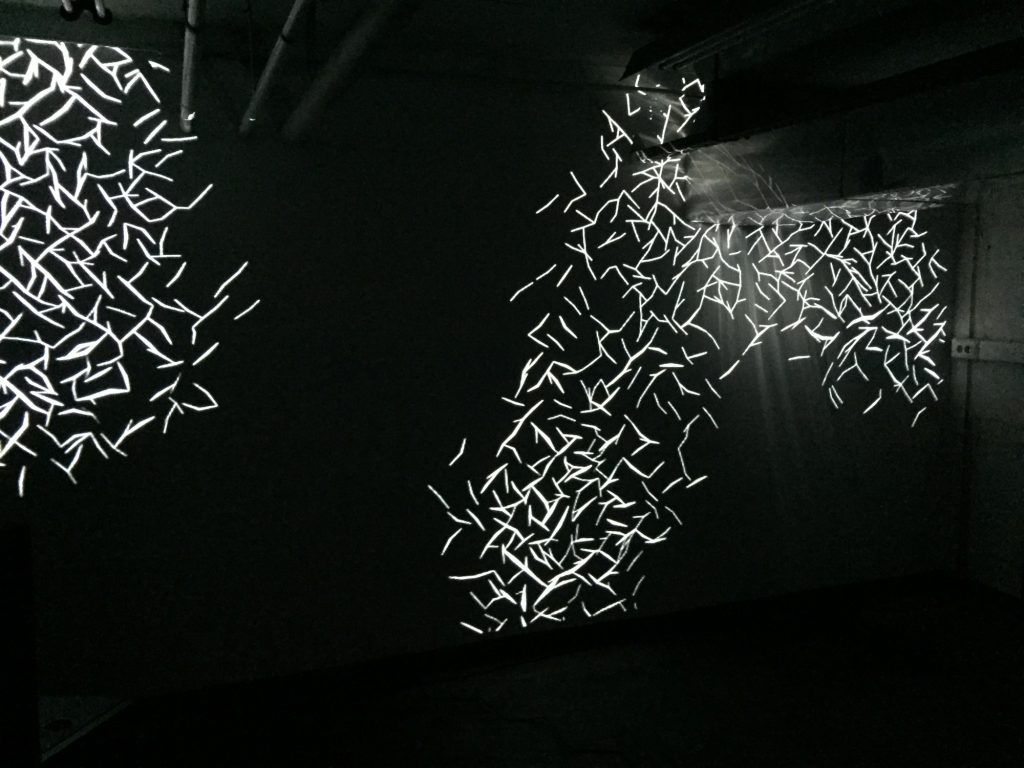 Continuing his artistic researches and representations about the concept of continuum’s disruption, the artist creates fract as an immersive monumental audio-visual piece.

Inspired by suprematist art current and brutalist architecture, fract constantly iterates the same process of cracking growth simulation based on physics of matter and real science of concrete.

The process is a metaphor of a new possible Myth of Sisyphus, depicting the ever cycle of destruction / reconstruction by using sound & visuals.

The display area on the wall figures a very bright light provided by the visual coming from a program through video-projectors. Progressively, cracks are appearing and growing in some place of the wall, represented by very dark fissures. The concrete surface is cracking and the sound comes louder, according to the progression of fissures, as a roaring matter, a crying structure. Then, the piece resets and the concrete wall is again lighted by plain white everywhere ; the process reseted, the concrete wall is like a new one, but every time the same one. A new fragility maps is calculated, providing the way to grow fissures, and the process occurs again, an again.

Each final fissure painting is stored as vectorial file format in order to be re-used, as another way of using & reusing the same matter, as the piece re-use the same wall again and again. Some specific visual artworks could be extracted and derived from this digital files stored. Some 3D printing could also be created according to this data set.

fract is named according to fractal / fracture terms related to latin root fractus / frangere which means breaking into pieces. fract then addresses the main dystopia of civilizations related to paroxysm & decline cycles through the concrete building / destruction metaphor. Constructivist architecture in Slovenia also relates to these ideas and resonates with the piece itself.