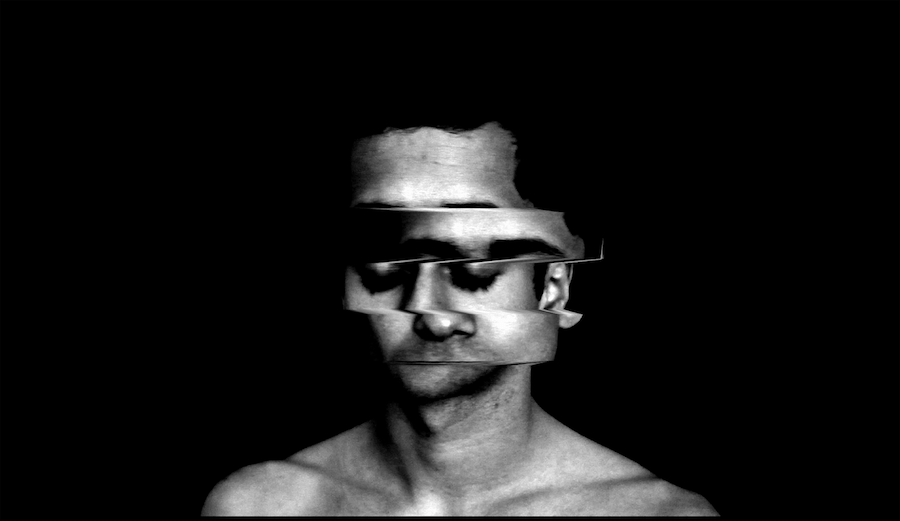 FRGMENTS is both an audiovisuel live performance and an autonomous installation showing the permanent disruption of a continuous sound & visual flow.

FRGMENTS is a real-time programmed system that displays pre-shooted video footage and then, assemble them again, sort them, cut them time-wise (scrambled playing order, unexpected time loops) and space-wise (fragmentation of the video matrix itself, unexpected collage of part of videos). It runs a specific generative narration which plays following different contexts, being able to be completely autonomous (installation version) and also controlled (live performance version). It spreads and generates sound, some parts that have been partially written using a specific set of rules and algorithms, playing with metric, bars, time and loop concepts.

FRGMENTS is inspired by the cut-up concept/technique, created by Brion Gysin and deeply applied, especially, by William S. Burroughs, but also by Tristan Tzara and his folding techniques. Since 20s, dadaists used decontextualization & reuse of pre-existing work for creating a new matter, sometimes new texts as Burroughs did, but also as Ellsworth Kelly did with his cut & re- assembled paintings. Julien Bayle made a reference to cut-up also by manipulating the name of his project FRAGMENTS by removing the « A » and by glueing the two separated parts of the word.

FRGMENTS displays human video portraits without any specific facial expression, all shot under the same conditions, systematically and almost-scientifically in the same posture, the same framing, rotating, or static.
By the use of this footages as a raw matter, FRGMENTS proposes a complete time-wise and space-wise recomposition of the video sequence and creates a each time a new visual and sounding matter permanently and constantly generated and regenerated.

Some of the technical concepts used are:
– cutting images into pieces, glueing some pieces,
– time disrupted playing and reordering sequence in time,
– wrapping images by distorting it and overlaying some parts
– sound spatialization depending on the part of the picture that has been altered using ambisonic spatialization technique

FRGMENTS intensively involves senses by exploring perception itself.
Some frames are extracted from all these neutral expression faces coming from this raw matter. The system at the core of FRGMENTS seeks, cut videos very rapidly and overlay them in time as if it would try to make some signals or feelings emerging from the silence of neutrality. The software tries, recomposes, as if it would want to attempt all possible combinations. Very rapid fragmentations of videos displayed and bursts of pixels are combined with triggered sounds barely perceptible or sometimes saturating the space too. This permanent oscillation between a possible musicality and a sounding chaos reminds us machines’ problems.
All these visual & sound techniques provides to Julien Bayle a way of pushing the limit of his work further as if he wanted to reach an always running away frontier…

By using these very intense sensorial involvement, FRGMENTS tries to show the artist’s obstinacy in trying to understand who the other is and what it can feel.