struct is the codename of the live improvisation with modular synthesizer, including visuals generated in real-time and coming from the analysis of the sound itself. Before having properly named it struct, julien bayle recorded two live performances with this setup: one for Secret Thirteen community and one for Shape Network / Radio Campus.

struct addresses the idea of post-techno improvisation by relating to electronic music but on a unique odd way. Indeed, it relates to musical structures where the percussive sounds can structure the whole but in which the structure can also be created by the noise itself. Techno music relating to step sequencers and rigid repetitive structures, struct flirt and disturb this repetitive concept to go from linear grids to sparsed particles, from order to chaos.

struct also addresses the concept of system structuring and constraining everything. By using a pre-programmed system for live visual generation, the artist have to deals with the system on stage. Depending on the sound itself, analyzing deeply the music content from frequencies to repetitive structures using advanced maths based algorithms like Markov Chains, struct displays unique visuals at the border between organic growth, crystallization process and architecture.

The performance can be set up for small or large place, for pure noise festivals to more usual sound & digital arts festivals. The flexibility of the set up and sounds provided by struct is a feature of itself.

Quote from Tadas Svencionis, author for Secret Thirteen about « Parasites Compressor », live performance exclusively recorded for the community itself :
« Using two low-frequency oscillators instead of a global master clock to drive all modules, he creates a combination of rhythmic patterns that sounds like a collapse indefinitely delayed. Julien uses machines to catch the electric noise of the equipment (electric parasites, as it were), amplifies and compresses it – hence the title. “Parasites Compressor” is, essentially, a recording of machinery ordering chaos. It resembles Frederick Hammersley’s hard-edge painting “Sanforized, #1” where cool black abstractions symmetrically lie on the clear background. The viewer’s concentration, patience and imagination are necessary to fully absorb work’s aesthetics and the coded message within the geometrics of this masterpiece – just as in Bayle’s skillfully generated live recording. Both works radiate with the feeling of having been made by artificial intelligence, but in reality both of these works stand as good examples of how far a human’s mind can travel to create forward-thinking art. » 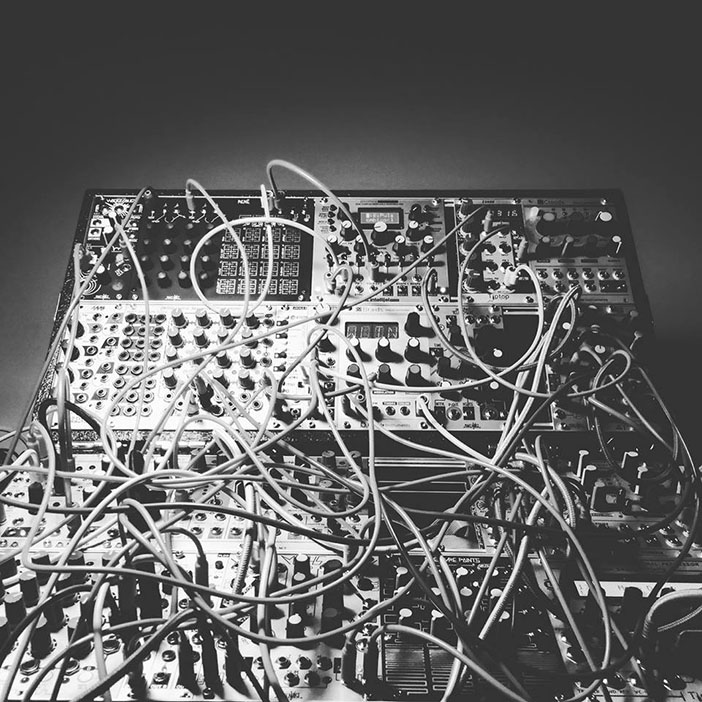