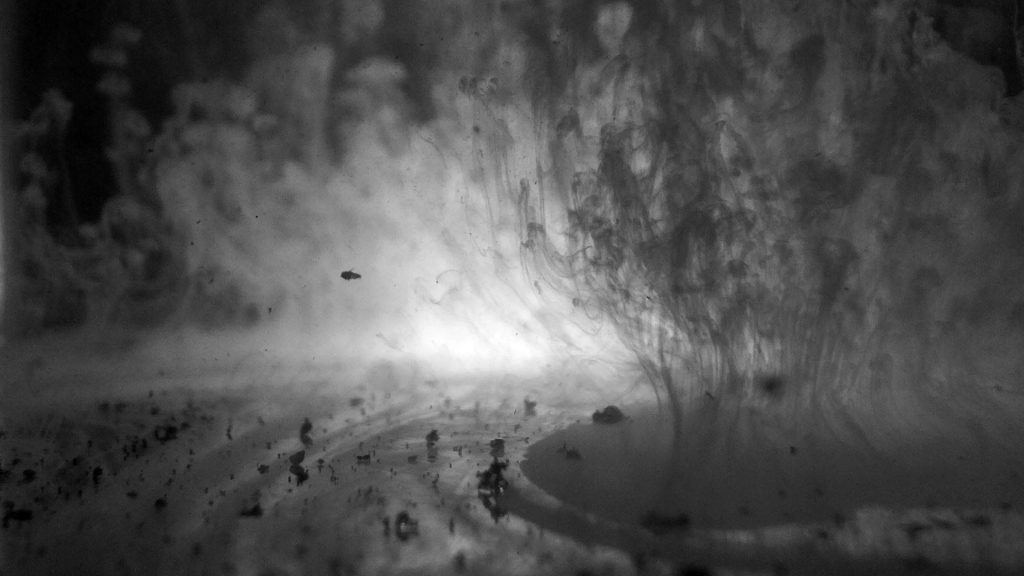 Born out of the meeting of Julien Bayle & Sebastian Sarti, two artists with very different cursus, MATTER duo is named about their first eponymous project. Sharing common intellectual inspirations as much for scientific investigations processes as for dense and mythological fiction of H. P. Lovecraft author, both artists work out on their collaboration during two years. In 2017, they achieved these thoughts into a first audiovisual live performance project which was aiming, at first, at the exploration fragility of instant. Having defined a common working basis consisting in capturing of sound textures on a side and of visual textures on the other, and also in designing a proper advanced and custom system, MATTER takes shape in June 2017 during an artist-in- residence program at AMI non-profit organization (Aide aux Musiques Innovatrices) in Marseille, supported by RIAM Office. MATTER explores decontextualization by playing with time & space scales change allowed, for the sound part, by modular system and especially granular synthesis and sampling/resampling too, and for the video part, by a software specifically designed using MaxMSP which provides a way for playing and doing video cut in on the fly. MATTER allows the artists to explore intuitively new fields of audiovisual live performance improvisation by making them focused only on sensitive material and immersed as the audience within decontextualized scales of time and space. Non-linearity and non-euclidean processes are also magnified all along the live performance and artwork.

Wanting to continue to collaborate, Julien Bayle & Sebastian Sarti propose to perform their piece inside usual spaces with one screen and stereo sound system, but also in new contexts more complex like 360° sound diffusion & visual display like domes. The duo also wants to have an in- situ approach in which they could study a place by capturing sound and visual textures during an artist-in-residence time and then by performing their very specific audiovisual live performance in that same place, as if they were painting that steeped place on an impressionist way.