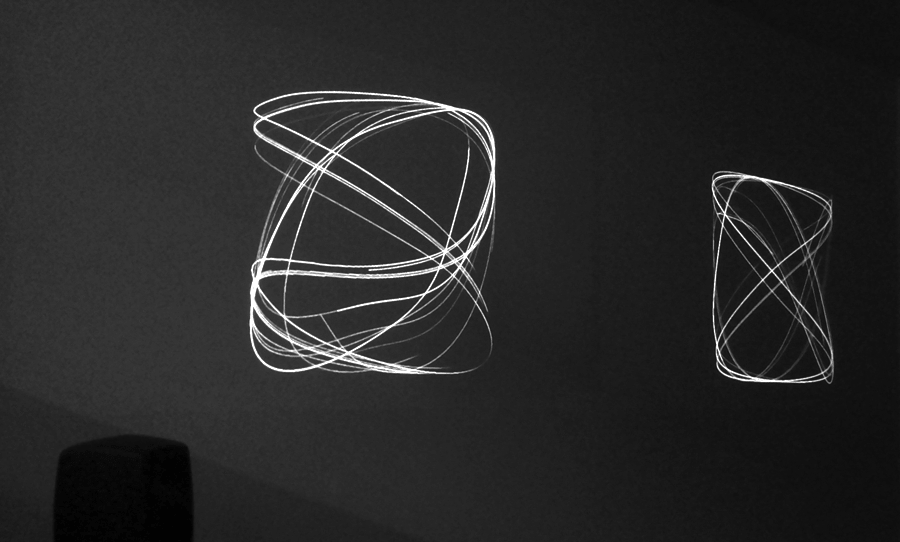 As part of its public programme, NMNM–Villa Paloma presents Disrupt!on, a performance installation by Julien Bayle, curated by François Larini (NMNM), which takes place simultaneously and live in Monaco and at news of the world space in London.

Julien Bayle is a minimalist sound and visual artist working at the juncture of sound, visual and digital data.

Through successive digitally generated and evolving sequences, Disrupt!on explores the phenomenon of disturbance. It reflects how a deterministic system can produce – through its existence within a wider system and through external interventions – an effect which becomes unpredictable.

The Disrupt!on performance at Villa Paloma is an electronic piece lasting about 30 minutes exploring and developing all the work’s concepts, producing its sounds and displaying the continuous flow of data. The performer interacts with sound, sometimes changing the low-level parameters of the oscillators, sometimes altering time parameters without ever using a proper tempo, but every time destabilising the very system he created.

The Disrupt!on installation at news of the world space is London is triggered by the start of the live sound/visual performance in Monaco which activates some of the installation’s processes through the internet, using basic communication protocols. The data fed into the algorithms by the artist creates an aural and visual output which, from Monaco, evolves, informed, corrupted and ruptured by audience interaction through social networks as the data travels the net to London. The higher the number of interaction, the greater the unpredictability of the system’s output.

After the end of the performance in Monaco, the London installation is fully launched, and the stimuli received from the present audience or tele-participant, through Twitter #blpmc, continue to disrupt the installation, creating glitches, reaction, random events and system degeneration. Each hashtag are sensed and contribute to increase the global installation’s entropy.

Experimenting with the concept of control vs. chaos both in his installations and live performances, Julien Bayle draws from Richard Artschwager’s “blp” idea, seen as a kind of sudden burst of information within various landscapes.

In our era of digital sound and cloud computing, the name itself (blp pronounced “blip”) refers to an electronic sound suddenly appearing in our soundscape as a noise, an alarm or a tune… (like Artschwager blp suddenly appears in a landscape). Within a computer and network based audio-visual system, they can be translated into a behavior that would be new, uncanny and disruptive.

The originals blps – an oblong shape developed by Richard Artschwager in 1967-1968 – were flat painted pieces of wood, but he soon made them from spray paints and stencils, adhesive decals and rubberized hair. In 1971, the exhibition Sonsbeek buiten de perken (Sonsbeek Between Lawn and Order) took place in the Netherlands. Artschwager’s contribution, Utrecht Projekt, consisted of blps installed around the city and a catalogue of photo-documentation showing the blps in urban and rural settings. The catalogue was accompanied by an album that played the sound of a ticking clock on one side and that of a dripping tap on the other. He considered these mundane noises an auditory counterpart to his blps: background sounds that often go unheeded, but which, once noticed, are almost impossible to ignore.

Nouveau Musée National de Monaco (NMNM) – Villa Paloma presents the most comprehensive retrospective to date of Richard Artschwager’s [1923-2013] work from February 20 until May 11.

The exhibition is organised by the Whitney Museum of American Art in association with the Yale University Art Gallery, and curated by Jennifer Gross, Chief Curator and Deputy Director for curatorial affairs at the deCordova Sculpture Park and Museum, in Lincoln, Massachusetts.